The Word is TORTURE

How many headlines like this have been pooping up since bin Laden's well-deserved death?


Harsh Interrogation Tactics: Did They Work?

The word is torture. Waterboarding is torture. This has been established since at least the Philipine Invasion of 1898.  United States Military courts have convicted US Marines of torture for using what was then known as "the water cure." (link)

On the way home from work today, some reporter on NPR was referring to "harsh interrogation techniques" and "methods some have referred to as being torture."

I don't get why we have to pussy-foot around this. Waterboarding is torture. Torture is a war crime. It's like if the press said the John Dillinger committed what some have called bank robberies. Or The Unabombers harsh anti-technology persuasion methods. It bullshit, and everyone knows it.

The word is torture. Why can't we just say it?
Posted by Professor Chaos at 8:49 PM 1 comment:

Sorry It Took So Long

(via Sober in a Nightclub) 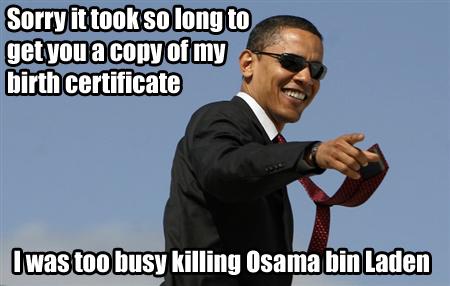 Posted by Professor Chaos at 8:29 PM No comments: