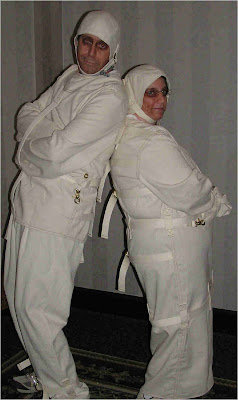 What Michele Bachmann is to the Congress, James Inhofe is to the Senate.


So it should come as no surprise that he had a somewhat, oh, I don't know, what's the word. . .CRAZY reaction to Barack Obama's Cairo speech.

WASHINGTON -- Sen. Jim Inhofe said today that President Barack Obama's speech in Cairo was "un-American" because he referred to the war in Iraq as "a war of choice" and didn't criticize Iran for developing a nuclear program.

So apparently, pointing out a patently obvious fact, like that the war in Iraq was maybe less than an absolute necessity is "Un-American." Also, it is "Un-American" to not criticize Iran when visiting Cairo? Which last I checked was in Eqypt? Which is different from Iraq?

Inhofe, R-Tulsa, also criticized the president for suggesting that torture was conducted at the military prison in Guantanamo, saying, "There has never been a documented case of torture at Guantanamo."

Um, Senator? When you say there has never been a documented case of torture at Guantanamo when there quite obviously has been, it kind of makes it less believable when you say things like : "I'm really proud to say that in the recorded history of our family, we've never had a divorce or any kind of homosexual relationship.” See, if you really think that there have been no cases of torture at Gitmo, then I think that its probably safe to assume that your family is chock-full of gay divorcees. And not for nothing, does your family actually have a recorded history? And does that history have in it a tally of how many homosexual relationships each family member has had? (zero. Yep, zero for me too, pop! Put me down for zero!) 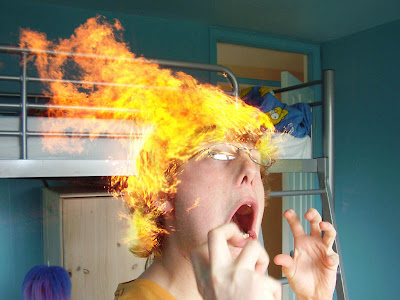 There have been No Documented cases of my hair ever having been on fire!


You know, it's one thing for a single Congressional district to elect a nut like Bachmann. One assumes that Minnesota is probably heavily gerrymandered, All the republicans in this district, all the democrats in that district, all the paranoid pants-wetting loonies in this one.
But Inhofe is a Senator. So he has to get the majority of the entire state of Oklahoma to vote for him. And a majority of Oklahomans did just that in a special election in 1994. And again in 1996. And in 2002. And in 2008.

Apparently, Oklahomans have no problem being represented by a man who says things like this:

"I can assure you that these 20 kids and grandkids are very proud and very thankful that today, 47 years later, my wife and I believed in Matthew 9:14, that marriage should be between a man and a woman."
Because if we hadn't believed that, we'd have been off to the Castro!

“One of the reasons I believe the spiritual door was opened for an attack against the United States of America is that the policy of our government has been to ask the Israelis, and demand it with pressure, not to retaliate in a significant way against the terrorist strikes that have been launched against them.“
Yeah, they went through the reqular airports, not any "spiritual doors."

"I have been called -- my kids are aware of this -- dumb, crazy man, science abuser, Holocaust denier, villain of the month, hate-filled, warmonger, Neanderthal, Genghis Khan and Attila the Hun. And I can just tell you that I wear some of those titles proudly."

"I've been personally attacked by Anderson Cooper. It's taking place right now, even this week, calling me every kind of name---all kinds of threats."

(For the record, there are no documented cases of Anderson Cooper making threats against senator Inhofe.)
"What’s happened there [Iraq] is nothing short of a miracle,”
Miracle, debacle; to-may-to, to-mah-to!

I believe very strongly that we ought to support Israel; that it has a right to the land. This is the most important reason: Because God said so. As I said a minute ago, look it up in the book of Genesis. It is right up there on the desk.

Well, that's certainly a sound basis for foreign policy. I'm pretty sure that if God wanted Isreal to have that land, he would be capable of giving it to them Himself. I think it says something in the Bible about God being able to do stuff.

"There is "no convincing scientific evidence" that human activity is causing global warming, declared Inhofe, who once called global warming a hoax. "We all know the Weather Channel would like to have people afraid all the time."

So, congratulations, Oklahoma. Between James Inhofe and Tom Coburn, I believe you are officially the Craziest fucking state in the union.