Apparently, the former president has teamed up with James Patterson, he of the dime-store detective books, to pen a putative thriller called "The President is Missing." Is it any good? Oh, my - I wouldn't think so. But maybe? I wasn't about to buy it, and if the library even has it yet, it's probably wait-listed, so I went searching for excerpts on line. This is what I found:


So the titualr president, Jonathon Duncan, is also the first-person narrator of the book. His name is Jonathon Duncan because "Will Sminton" was nixed by Patterson. I assume. He is, as you would assume, meant to be a stand-in for POTUS 42, and he says very realistic, natural-sounding dialogue like "Everything I did was to protect my country. I’d do it again. The problem is, I can’t say any of that."
and
“All I can tell you is that I have always acted with the security of my country in mind. And I always will.”
and
"I lash out and whack the microphone off the table. I knock over my chair as I get to my feet." 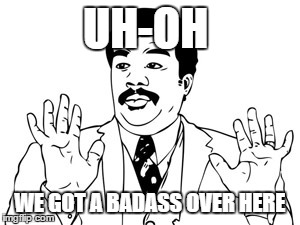 Referring to a potential cyber-attack from a terrorist organization, another character gives us this pearl of wisdom:

"One of the great ironies of the modern age ... is that the advancements of mankind can make us more powerful and yet more vulnerable at the same time.” And why? “The reason is reliance. Our society has become completely reliant on technology"

Oh my God! I never thought of it that way! Is what I would say if I had just awakened from a 20-year coma and have no memory of the Y2K panic of 1999.

There are timely references, like the description of a hacker who is  “a cross between a Calvin Klein model and a Eurotrash punk rocker”.

And this completely tone-deaf description of an assassin:


“Sexy”, and “allowing just enough bounce in her girls [sic]”, as she strides around in her knee-high chocolate leather boots, she names her favoured weapon “Anna Magdalena ... a thing of beauty, a matte-black semiautomatic rifle capable of firing five rounds in less than two seconds”.

Because now is exactly the time in our history that you want to be fetishising guns!


There's this proof that the fictional president is, after all, just a regular all-American guy at heart, when he attends a baseball game and says:

“Ordinarily I’d be like a kid in a candy store here. I’d grab a Budweiser and a hot dog. . . there is no finer beverage than an ice-cold Bud.”

Christ, this guy can monetize anything! A beer commercial in the middle of your novel? Part of me wants to applaud, part of me is nauseous.

But regular guy or not, this president is woke AF!

Woah. . .heavy! That's like a real like Marxist critique of the system or something, man! Although he feels it necessary to temper that scathing criticism of the biases in law enforcement with this bromide:

“I know that most cops, most of the time, do the best they can”

Anyway, my computer is acting up, so let's skip to the conclusion of a review in the New Republic:


To boot, the book ends with the revelation that the villain all along was feminism. The following is a spoiler, so look away if you wish to read The President Is Missing with all bells and whistles intact. “How could you do this?” the president asks the traitor in his midst, once he’s figured it all out. The answer, when it comes, is a surprise to him. The traitor’s face is “twisted up in agony and bitterness,” full of resentment. “Says the man who gets to be president,” she replies. “Says the man who didn’t see his political career tanked” over one little mistake.


Oh, my God, the villain is Hillary!
This man wrote an entire novel in which his wife is the villain.
The woman who is resentful because she doesn't "get to be president?"
The woman who is bitter that her political career was torpedoed by "one little mistake? (emails? 'Deplorables?' Killing everybody in Benghazi?)"

That sounds like Hillary. Or a caricature of Hillary, anyway. A caricature that a shitty husband might make of his wife. This entire novel is just a setup and the punchline is "take my wife, please!"

I forgot the best part!

Re: yesterday's post, about the fake movie trailer designed to cajole Kim Jong Un into making some sort of a deal with the US, I forgot the best feature of the whole thing.

Every word is in English. Does Kim even speak English?

Do you know how easy it would be to find someone fluent in both English and Korean to translate the script and read it in Kim's native tongue? I mean, you might have to go to Los Angeles, but if you're making a foray into film production, you should probably go there anyway.

How do you not have it in Korean? It's mind-boggling!
Posted by Professor Chaos at 4:02 PM 1 comment: