Why "Blue Bloods" is the worst show on Television. 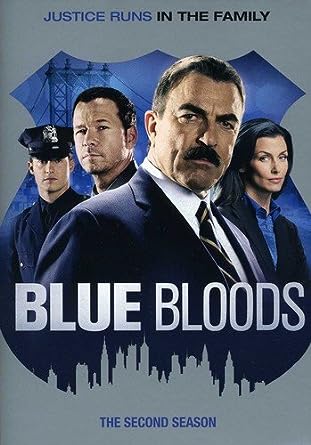 Before we get into what makes Blue Bloods so gawd-awful, let me just say this. This is a good cast. Donnie Wahlberg is terrific. I would really like to see him in something good. I would like to go back in time and have him play the Casey Affleck character in Gone Baby Gone., because that was a really good movie, but Casey Affleck was sadly mis-cast. There are a couple times in that movie when his character has to be intimidating and Casey Affleck just can not pull off intimidating. Wahlberg can.

But the cast overall is quite good. There's former child star Will Estes, Bridget Moynihan who I know from somewhere but can't place her, there's Oz's Robert Clohessy and the Sopranos' Steve Schirripa, NYPD Blue's Nicholas Turturro, and Third Watch's Amy Carlson.
Plus, there's this guy: 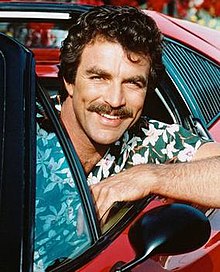 So, a good cast all around. Wasted on this horrible show.

Cop shows in general tend to have the problem that they portray cops as always unambiguously the good guys. The heroes. Other than The Shield, that seems fairly universal. But no cop show I've ever seen has the level of worship for cops than Blue Bloods.

I get it, the main characters are all cops, you want your main characters to be the good guys, but holy fucking hell, this show feels like it was written by the police union or something. These cops never miss a chance to pat themselves on the back for having the courage and strength of character to have chosen this most noble of professions. Oh, and heavy indeed lies the head which wears the policeman's cap! But the gallant men and women of the NYPD take on this daunting sacrifice selflessly, the pursuit of justice their only reward! 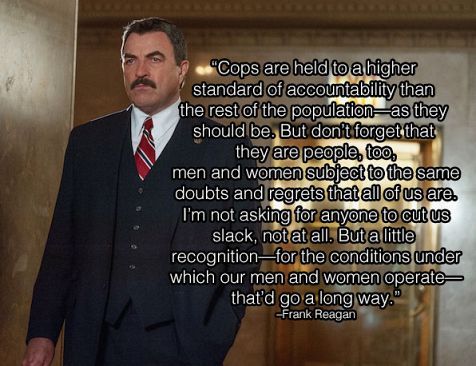 Which, of course, means that any character who has a problem with the way the cops do their jobs, anyone who protests against police violence or insists that black lives should matter is automatically a villain. Anyone who objects to any aspect of modern policing is either an attention-seeking troublemaker, or is out for some kind of payday, or has some other ulterior motive. No one who complains about the tactics of the NYPD is ever sincere or has any sort of legitimate complaint.

For exaample. there is a character who is a minister. A blcak minister, a stand-in for a Jesse Jackson or ans Al Sharpton, who is a frequent critic of police brutality. He is depicted as, at best, a nuisance and a troublemaker. On one episode, the minister's son is murdered. The minister and a member of the minister's "security detail" bring a suspect into the station. The man is bleeding from his nose and mouth, the minister's security guy says he "fell" on the way to the station. Because, of course the Reverend and his security guy are complete hypocrites. Of course, when they apprehend a suspect, they immediately do what they complain about the cops doing. And Donnie Wahlberg, straight-arrow that he is, says thet now he can not interrogate the man because he's been "tuned up" by the pastor's goon and now anything he says will be "tainted." Because no cop ever EVER breaks any rule or code of ethics or cuts any corners. That would violate the policeman's code of honor! Why they'd rather die than do that.

Strangely, in one of the first episodes of which I saw a bit, Donnie Wahlberg chases a man across the rooftops until he has him cornered. The bad guy asks something like "what are you gonna do now?" which is already weird, becausae he's asking very smugly as though he has the upper hand, but that's not the point. The point is, when he asks that, Donnie kicks him in the crotch and then pistol-whips him. And Donnie is the "good guy!"

Donnie's father (Tom Selleck) and grandfather are both NYPS veterans (Get it? Blue Bloods? 'cuz being police is in their blood?" Eh? Get it?) They reminisce about the good old days when cops were allowed to just beat the shit out of people and we're just supposed to play along with this notion that they aren't able to do that today. One time the grandfather sees a protester on TV and says something like "I'd like to kick his ass." Tom Selleck replies wistfully "These days, that would be considered 'excessive force.'"

This is another problem that is endemic to cop shows, this ridiculous notion that cops are in constant danger of losing their careers because of various elements of society, especially Internal Affairs, are just looking for any opportunity to take a good cop down. That any time a cop neglects to cross a T or dot an I, the "rat squad" will come down on him with a vengeance looking to exact punishment. It's completely absurd, of course, but you watch enough of these shows and it starts to seem like it's true. You know, there's a lot of things that I think I know about the legal system that, if I really thionk about, I only know from Law & Order. And they're probably not true. But that is a subject for another time.

Oh, and we're just getting started on Blue Bloods.

This is going to be a two-parter. At least.

It seriously is the worst show on television.