Or maybe not so much "bizarre" as just "spectacularly assholish."

A pair of Republican legislators in Wisconsin are circulating a draft of a bill that would allow a 7-day work week for the state’s workers. According to the Stephen Points Journal newspaper, the two lawmakers are floating the bill on behalf of the state’s largest anti-union business lobby, Wisconsin Manufacturers and Commerce.


It was proposed by state Sens. Glenn Grothman (R) of West Bend and Mark Born (R) of Beaver Dam

Well, I'm sure they all have the people's best interests at heart! 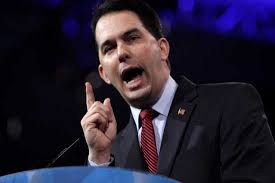 
Republicans say that the bill will expand workers’ opportunities to make money by working unconventional hours.

Did you know that in Wisconsin, their word for "opportunity" is the same as the word for "getting fucked over?"

Opportunity? The opportunity to work seven days a week? Who the fuck do you think wants that opportunity? Although. . . I do seem to remember hearing something about some people. . . hmmm. . .

Wisconsin state Sen. Glenn Grothman (R) is attempting to roll back one of the state's progressive labor laws, arguing that workers should be allowed to work without a day off if they so choose.
"Right now in Wisconsin, you're not supposed to work seven days in a row, which is a little ridiculous because all sorts of people want to work seven days a week," he told The Huffington Post in an interview.

A bunch of businesses support a law that helps businesses screw their employees? Well, why didn't you say so? Oh, hey, this just in: chubby children support the "seconds on ice cream" bill!

“Here’s an opportunity for folks to work together to get things done in a positive way for the employer and the employee,” Born said. “It just seems like a win all the way around.”

Sure, just like being cellmates turned out to be a win-win for Schillinger and Beecher!

Working together in a positive way, you know, the way where one side gets whatever they want and the other side takes it and likes it.

Oh, and here's something I didn't know:

Wisconsin is one of the few states in the nation where businesses "must provide employees with at least one period consisting of 24 consecutive hours of rest in each calendar week." This doesn't mean that workers get to take off once every seven days; an employee could work for up to 12 consecutive days "if the days of rest fall on the first and last days of the 2 week period."

Really?!?! In most states your employer does not have to give you a single day off? In most states they can work you seven days a week? God, this is a hell of a country!
Posted by Professor Chaos at 6:31 PM 3 comments: