You know Tom Coburn? The nut sack from Oklahoma who says things like this: 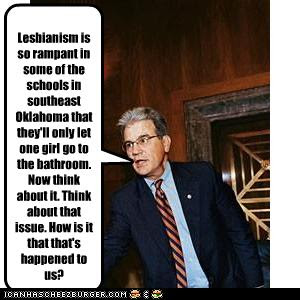 Yeah, he's an actual Senator from Oklahoma. I know.

Anyway, turns out he's got a guy on his staff who may be even nuttier!
Introducing Sen. Tom Coburn’s chief of staff Michael Schwartz.

Here's what Mr. Schwartz had to say at the recent "Values Voter Summit."

I'm not sure exactly what that means, turning your sex drive inwards, but it seems like maybe if you look at enough pornographic imagery, you will want to start fucking yourself, which would be same-sex relations, I guess, because you are the same sex as yourself, or something, so bada-bing, you just turned gay? Maybe? I don't know, I'd better let Mr. Schwartz explain.

It’s been a few years, not that many, since I was closely associated with pre-adolescent boys, boys who are like 10 to 12 years of age. But it is my observation that boys at that age have less tolerance for homosexuality than just about any other class of people. They speak badly about homosexuality.
And that’s because they don’t want to be that way.
They don’t want to fall into it.”
Ok, couple of things, Mike.
One -- yes, its true that a lot of 10-12 year old boys are kind of dickish, but I'm not sure that really goes to prove your point.
Two -- I think the reason 10-12 year old boys speak badly about homosexuality is that A) They don't really get what it is, but they know that words like "fag" and "homo" make pretty good insults.
and B) the reason they have such negative views of gay people is because of assholes like you who teach them that the gay folks are evil and inferior before these kids even get what the word gay means. (speaking from experience here, I know I was raised to have very negative ideas about the gay folks long before I knew what "gay" meant) 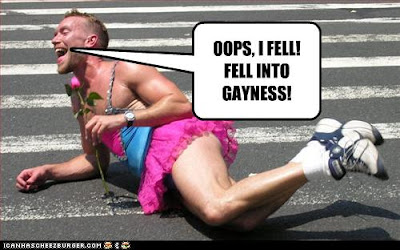 They don’t want to fall into it. And that’s a good instinct. After all, homosexuality, we know, studies have been done by the National Institute of Health to try to prove that its genetic and all those studies have proved its not genetic. Homosexuality is inflicted on people.
No, seriously, it isn't. That's just such a wrong thing to say on so many levels, I don't even know where to start.
First of all, it really is not such a good instinct to worry about falling into something which can not be fallen into. It's like worrying about falling through the looking glass.
Second, there is a HUGE flaw in your logic. Because the NIH has not discovered a "gay gene," does not mean that a person's sexuality does not have a genetic component. It may , it may not. Not that it matters, but genes may very well play a part. Genetic research is a very young science. But the bigger logical flaw is to leap from "homosexuality is not genetic" to "it is inflicted on people." Besides being a really offensive thing to say, it's just incorrect reasoning. One does not follow from the other.

But don't let me stop you from spewing the crazy.

“all pornography is homosexual pornography because all pornography turns your sexual drive inwards. Now think about that. And if you, if you tell an 11-year-old boy about that, do you think he’s going to want to go out and get a copy of Playboy? I’m pretty sure he’ll lose interest. That’s the last thing he wants.” You know, that’s a, that’s a good comment. It’s a good point and it’s a good thing to teach young people.
Ok, if sneaking a peek at Playboy at the age of 12 would make you gay, I'm pretty sure I'd be Liberace.
Also, bald-faced lies are probably not a good thing to teach young people. If you want to keep young guys from looking at naked women, well that's pretty much a fool's errand, but telling them it will turn them gay is about the stupidest thing I've ever heard. Wouldn't Hugh Heffner be gay by now? Or Larry Flynt? Or the countless men who subscribe to their magazines? Wouldn't all the subscribers have to at some point say, "Dear Mr. Flynt, Please cancel my subscription as I no longer have any interest in naked women, what with my being gay and all."

Seriously, it's beyond me how anyone listens to nuts like this.

Be on the Lookout

All citizens are advised to be on the lookout for Meat Baby! 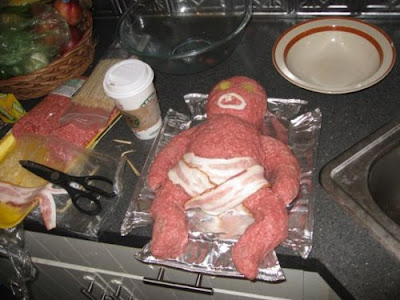 Last seen wearing a bacon diaper, he is considered to be armed and delicious. If you see Meat Baby, do not try to apprehend him yourself, call the local authorities.
Or call me. I've got some A-1 and I'm not afraid to use it.
Posted by Professor Chaos at 5:35 PM No comments: 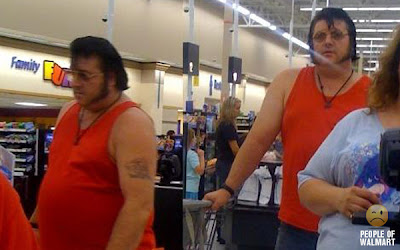 Damn you, Mad Scientists! Why would you clone Fat Elvis? You should have cloned young "Hound Dog" Elvis! See, this is why everyone hates mad scientists. You ever notice how mad scientists are always the bad guy in the movies? Well, this is why. Jerks!
Posted by Professor Chaos at 5:31 PM No comments: