What did David Hall do that was so heroic?
Glad you asked!
He refused to watch a training video at his place of employmen - -  wait. that can't be right, can it?

Ohhh-Kayyyy.
So he heroically refused to watch a video?

A short video about lesbian, gay, transgender and bisexual diversity may bring an abrupt end to a federal employee's 14-year career with the Social Security Administration. David Hall, who works in information technology at the agency's office in Champaign, Ill., refused to watch the 17-minute video on several occasions.

The 42-year-old, who identifies as Christian, said he does not believe God would have wanted him to watch the video. Signing a statement he had watched such a video, moreover, was equal to endorsing "an abomination," he told WCIA. "I'm not going to certify sin."


Wow, someone certainly has a high opinion of himself! You think God Almighty cares whether you watch a training video that your job requires you to watch? And you think that your stupid signature on a form is going to "certify" sin? Like all the LGBT employees in your office are like "Oh, thank God - David Hall signed off on our lifestyle! Now we can gay around with impunity!"

The employee does not have a public-facing job, and said he considers himself neither a "martyr or a bigot." He told WCIA during an interview that the video was propaganda, and cited his right under the Constitution to religious freedom in support of his refusal


Well, I'm pretty sure that bigots never consider themselves bigots. And your freedom of religion entitles you to believe that LGBT people are bad and icky and going to heck and what-not, it doesn not entitle you to refuse to perform the duties of your job because you think that LGBTs are bad and icky and heck-bound.
Why do these people never understand what freedom of religion is? It means you go to your church and I'll go to mine and neither of us will face consequences form the government for our choice of deity. That's pretty much it. You don't get to refuse to do things that your job requires.

He could not be "sorta Christian," he said, any more than you could be "sorta pregnant." Hall added he has LGBT friends.

Of course he did! Of course he said that. They always do. And as we like to say here at the Chaos Compound, "name one!" Go on. Name one LGBT friend you have. Name the LGBT person with such low self-esteem that he or she is willing to be friends with a guy who is so sickened by them that he can't watch a 17-minute video about not being a dick at work. Go ahead, name one.

Anyway, if you think refusing to watch a training video can't be spun into an act of heroism and martyrdom, you don't know Linda Harvey. (And count yourself lucky, she's fucking awful.)

Linda Harvey
on 28 September, 2016 at 08:00 David Hall is a hero for standing up and saying “no” to the lies and depravity wrapped up in on-the-job homosexual “diversity” training. He may lose his federal government job in Illinois, although based on what federal law would be anyone’s guess.


Um, I think it would be based on the federal law that if you refuse to do what your boss tells you to do, your insubordinate ass gets fired?


There is no U.S. statute that defines homosexuality and gender confusion as “civil rights.” The Social Security Administration, where Hall works, will be inventing a reason for his dismissal if they make that decision.


You do know you don't have to violate a federal law to get fired, right? You can get fired for excessive absenteeism, for poor job performance, or for refusing to do what your boss tells you is required because you are a self-righteous bigoted little prick.


Taking such a stand is a huge risk – financially, occupationally, personally – but it’s a risk more Americans need to take where they can. Our enlisted men and women in the military are facing the same daunting choice: condone deviance, or suffer the professional consequences.

Can't you see we need a hand?

The Navy has announced plans to require sailors to attend “training” to accept men who want to dress as women and vice versa. This would be, in a word, illegal.

Well, I'm no fancy big-city lawyer or JAG Off-
icer, but I'm going to go ahead and guess that the Navy has a better idea of what is leagl for the Navy to do than Linda Harvey. But I'm dying to hear the legal theory behind this!
Also? Enough with the quotation marks around random words. Whether you approve of the training or not, it is actually training.

No such law instituting gender rebellion has passed Congress. But the Navy believes military personnel should “… treat each other with dignity and respect,” a spokesman said.


Sp, the legal principle at work here is that the Navy can't decide to treat trans people with dignity unless and until Congress passes a law mandating that every person must become transgendered?

And this is the best way to accomplish that goal? Wouldn’t respecting people in their true, biological states be more appropriate than how some are unrealistically costumed?

Americans from coast to coast are fed up with homosexual and transgender foolishness and are wrestling with their consciences.


You could not be more wrong. What year do you think this is?

Teachers, office staff, factory workers, nurses, hospitality staff, first responders, bus drivers, etc. are furious at the illegitimate priority being given to deviant, unnatural behaviors. They ask themselves, “How can I serve God yet sit placidly by as depravity is elevated to a place of honor?”

What the holy living fuck are you talking about? You think that what you call deviant, unnatural behavior (what the rest of us call the love lives of some of our friends and relatives) is being given priority? Priority over what? Or whom? Is there somewhere that some hetero couple is being told "you can't get married until every LGBT person has had a chance to find love first! After all, they are the priority you know."
And you think that there is somewhere that what you call "depravity" (which the rest of us call love and/or attraction) is being "elevated to a place of honor?"

I mean other than Folsom Street?

Christians and conservatives are counted among all these professions, people who shake their heads over allegedly “mandatory” videos and seminars (aka indoctrination sessions) that make a fruitless attempt to normalize “LGBTQ” behavior and coerce employees to show “respect” for conduct that is clearly disordered.


Okay, either the training videos are mandatory or they are not. (they are). They're not "allegedly" "mandatory." If they were only allegedly mandatiry, David Hall would not be about to lose his job for refusing to watch them.

And let's talk a minute about "respect." (seriously, enough with the quotation marks.)
There are at least two kinds of respect. there's the kind that is like admiration, as in "oh, you volunteer to work with disabled children on your days off? Wow, I really respect that."
Then there's the type of respect that is the kind of respect that every person should get by virtue of the fact that they are persons. This type of respect is just like saying "Hey Jim. Boss said to meet in the conference room in 10 minutes." instead of saying "Hey, Jim. Boss said to meet in the conference room in 10 minutes, you filthy godless homo."
It's really not difficult at all, and you don't have to compromise your stupid awful principles. No one is asking you to say "oh, Jim, I didn't realize you had a boyfriend. That's fantastic! I really admire your ability to love other men!" All you have to do is - - - NOTHING! You don't have to comment on Jim'sd sexuality at all. You just say "Mornin' Jim." and go on with your day. You're making this a lot harder on yourself than need be.

Also, if you think that Jim's sexuality is caused by some sort of "disorder," it is not your place to attempt to diagnose or treat this alleged disorder. Just like it's not Jim's place to say "Hey, Linda Harvey, I noticed you've put on some weight. I really think you should consider going on a diet. You know, for your health."

Whew! I would have felt a bit shitty about that last bit if she were fat.

Anyway, she goes on and on for a while about saying "no" to common decency and the importance of passing your bigotry on to your children and whatnot, but I don't have the strength. What I do have the strength to do is, in the hopes that Linda Harvey Googles her own name and stumbles onto this post, add some bonus pictures from the Folsom Street Fair to freak her out a bit. 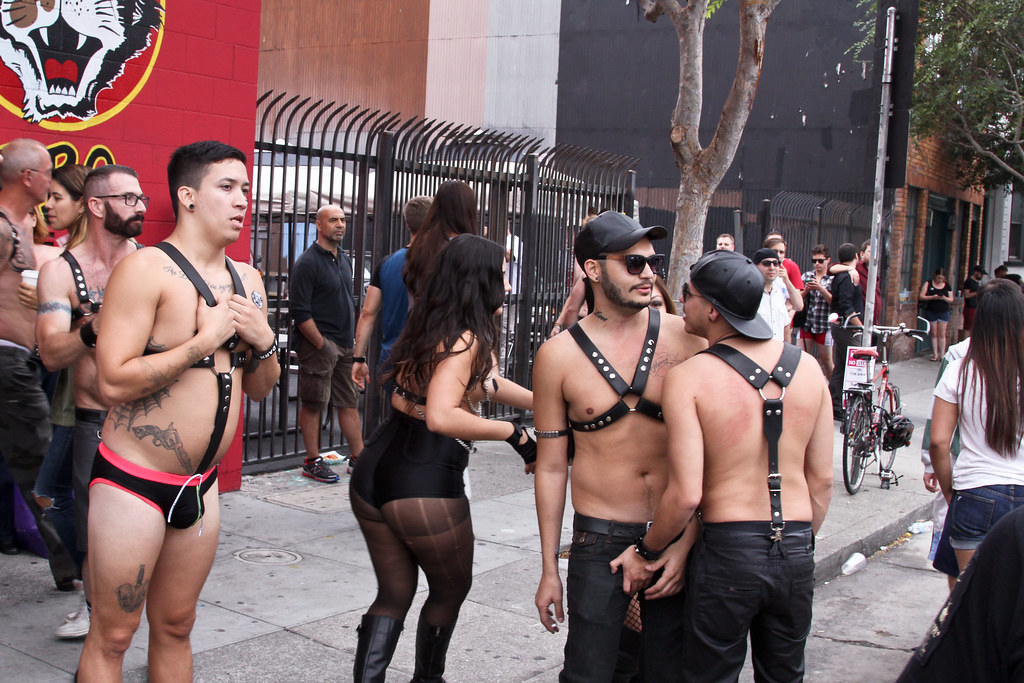