I didn't see last night's debate, because I'm not a masochist. . .


This morning, I saw a brief clip on some news show and Joe Fucking Arpaio is being introduced out in the audience like it was the State of the Union and Arpaio was some sort of hero and not a cheap, sadistic bully. 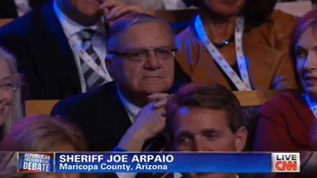 Now I find out that Santorum is citing Charles Murray to support his anti-contraceptive stance?

(source)
What I was talking about is, we have a society — Charles Murray just wrote a book about this and it’s on the front page of the New York Times two days ago — which is the increasing number of children being born out of wedlock in America, teens who are sexually active. What we’re seeing is a problem in our culture with respect the children being raised by children, children being raised out of wedlock, and the impact on society economically, the impact on society with respect to drug use and a host of other things, when children have children. And so, yes, I was talking about these very serious issues.

So, the solution to out-of-wedlock births is LESS contraception? How does this guy get taken seriously?

And Newt said this about the Obama administration:

Excuse me, I beg to differ!
I swear, nobody lies as glibly as Newt Gingrich. He lies with the smooth confidence of someone with absolute confidence that he will never be called on any of his lies. He lies like a parent telling their kids that Santa is coming, knowing that they will have no reason to have any doubt. No matter how many times he gets caught lying, each new lie just trips off his tongue with utter confidence that this time they're sure to buy it! I seriously think he's a sociopath. I don't mean sociopath like "a real jerk," I mean an actual diagnosable sociopath. He really does exhibit a lot of the signs.
Posted by Professor Chaos at 8:12 PM

Why is there a Jon Bruning ad at the bottom..asking for contribution? FUCK JON BRUNING...and the pig he rode in on. You want to talk about sociopaths? Jon Bruning is the epitome of the same such. Btw, I live in Nebraska.

They oughta just start a reality show starring these four jakasses,they could call it Ronpa and the 3 Lunatics.

And clearly they're hoping we'll forget the last republican president we had was easily the worst president ever;why would anyone sane vote for another one?