Harold Camping Sticks it to The Mayans

Harold Camping lets out a hearty chuckle when he considers the people who believe the world will end in 2012.

Yeah, take that, Mayans! You and your stupid calender! Let Harold explain why your 2012 doomsday prophecy is so stupid!

"That date has not one stitch of biblical authority," Camping says
Yeah! Wait, what?

Okay, so I know it says in the Good Book that no one will know when the end of the world is coming, so that must be what Harold means, right?
("Jesus himself said in Matthew 24:36, 'Of that day and hour knows no man, no, not the angels of heaven, but my father only.' ")

Camping, 88, has scrutinized the Bible for almost 70 years and says he has developed a mathematical system to interpret prophecies hidden within the Good Book. One night a few years ago, Camping, a civil engineer by trade, crunched the numbers and was stunned at what he'd found: The world will end May 21, 2011.
Really? You really think that God just thought to himself, "Hmm, I've got this super-important bit of information to share with the humans, I'd better put it in the Bible. But you know what, I'm in a feisty mood today, I'm gonna put it in their in a secret code that only a retired civil engineer will be able to crack with 70 years of study." Why would he do that? Either he would want people to know, or it would be a secret. You really think the Almighty would jerk around with secret codes? He's God, not the freakin Zodiac! 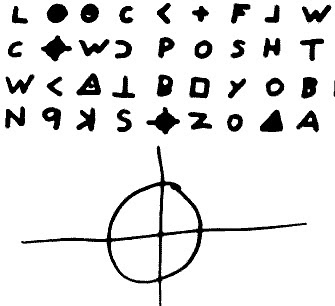 So what kind of cypher did God use, and how did Harold break it?

By Camping's understanding, the Bible was dictated by God and every word and number carries a spiritual significance. He noticed that particular numbers appeared in the Bible at the same time particular themes are discussed.

Yeah, great. Except that in ancient Hebrew culture, SEVEN symbolizes completeness. That's why the devil is assigned the number 666. The implication being that God is 777.

Wow! Well, at least no one is taking this kook seriously.

"We are now translated into 48 languages and have been transmitting into China on an AM station without getting jammed once," Camping said.
His office is flanked by satellite dishes in the parking lot that transmit his talk show, "Open Forum." In the Bay Area, he's heard on 610 AM, KEAR. Camping says his company owns about 55 stations in the United States alone, and that his message arrives on every continent.

Well, at least his doomsday date is coming up soon, and once he's wrong, all his followers will realize what a looney this guy is and that'll be the end of it, right?

This is not the first time Camping has made a bold prediction about Judgment Day.

On Sept. 6, 1994, dozens of Camping's believers gathered inside Alameda's Veterans Memorial Building to await the return of Christ, an event Camping had promised for two years. Followers dressed children in their Sunday best and held Bibles open-faced toward heaven.

He was already wrong 15 years ago? So his followers must have deserted him and these are new suckers, right?

Rick LaCasse, who attended the September 1994 service in Alameda, said that 15 years later, his faith in Camping has only strengthened.

"Evidently, he was wrong," LaCasse allowed, "but this time it is going to happen. There was some doubt last time, but we didn't have any proofs. This time we do."

Apparently, Ricky has a very different definition of the word "proof" than the rest of us.

Would his opinion of Camping change if May 21, 2011, ended without incident?

Or to think at all, apparently.

Posted by Professor Chaos at 8:05 PM

Well, you should be insecure - with the world soon ending and all.

Thanks for dropping by, my secretive friend

We are looking for the rapture and hope you are also! There are some Google articles throwing light on pretrib rapture defender Thomas Ice that you might like to see, namely, "Pretrib Expert John Walvoord Melts Ice" and "Edward Irving is Unnerving" (both found on Joe Ortiz's "End Times Passover" blog) - plus other Google articles like "Pretrib Rapture Diehards," "Thomas Ice (Bloopers)," "Thomas Ice (Hired Gun)," "America's Pretrib Rapture Traffickers," and "Pretrib Rapture Dishonesty" (the last two in colorful versions on the "Powered by Christ Ministries" site). Are you Dr. Ice ready as well as rapture ready?